Brent Demattia, age 24, of Hubbard, OH, was driving a 2001 Freightliner semi-tractor pulling a trailer westbound on A54B when he lost control of the vehicle, entered the south ditch, struck two concrete culverts and rolled onto its side.

Demattia was cited for failure to maintain control of a motor vehicle.

The sheriff’s office was assisted by the Fairview Fire Department. 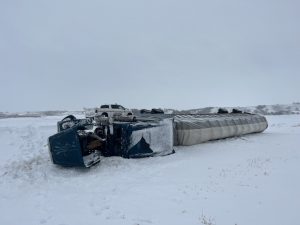