The arrest stemmed from an incident that occurred on Monday, October 24, at 3:15, on Highway 75, three miles southwest of Hull, IA, when a deputy met a Ford F-250 pickup that was losing its cargo; when the deputy attempted to stop the Ford; the driver, later identified as Wilson, began driving on the wrong side of the road, traveled into Hull, turned off the vehicle’s headlights and refused to stop. Wilson jumped out of the moving vehicle and fled on foot; the Ford came to a stop after it struck a residence near the intersection of 5th Street and Locust Street, causing minor damage.

Wilson was not located after fleeing on foot and deputies determined that the Ford had been stolen from Sioux Center, IA.

Upon further investigation, the sheriff’s office received a tip of a lost cellphone that was involved in the crime; deputies were able to recover the cellphone in a back yard near the location that Wilson had fled on foot. It was determined that Wilson was in possession of the cellphone at the time of the incident and was later identified by the tipster by viewing video from the patrol vehicle the night Wilson fled.

Wilson was transported to the Sioux County Jail where he was charged with eluding law enforcement, first degree theft, interference with official acts and other traffic violations. 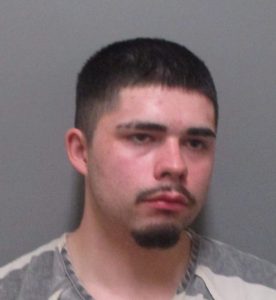