The new role for Van Voorst and the sheriff’s office comes after Dan Altena retired mid-term from the position of Sioux County Sheriff on August 31.

Sheriff Van Voorst says, “I am excited for this opportunity and look forward to carrying on the high quality law enforcement services the citizens of Sioux County are accustomed to receiving. I am honored and humbled by the outpouring of support of the staff here at the sheriff’s office as well as surrounding law enforcement agencies in our transition together through this change of leadership.”

Van Voorst is a Sioux County native, growing up in Rock Valley. He is a graduate of Western Iowa Tech in Sioux City, receiving an associate degree in Police Science and most recently a graduate of the Professional Leadership Development training. He has nearly 30 years of continuous law enforcement service, serving most recently as a Captain prior to the appointment to Sheriff. Van Voorst is married to Gwen and they have three adult children, five grandchildren and live on their acreage near Hull. 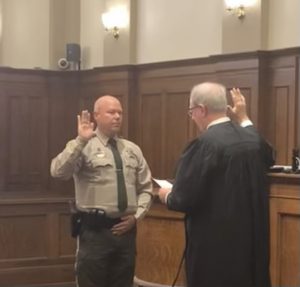