On Wednesday, November 10, at 2:05 p.m., the Sioux County Sheriff’s Office investigated a motor vehicle accident that occurred at the intersection of Highway 75 and 430th Street, one and one-half miles south of Sioux Center, IA.

Ryan Van Zee, age 47, of Sioux Center, was driving a 2021 GMC Sierra pickup southbound on Highway 75; he stopped for other vehicle traffic before attempting to turn left onto 430th Street. Brock Babcock, age 28, of Hinton, IA, was driving a 2017 Chevrolet Equinox southbound on Highway 75 behind Van Zee. Babcock was unable to stop and struck the GMC.

The GMC sustained approximately $15,000 in damage. Damage to the Chevrolet was estimated at $20,000.

Babcock was cited for following too close. 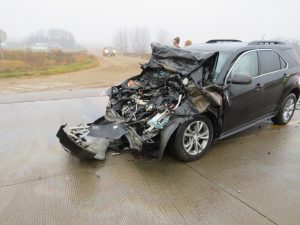