On Saturday, July 17, the Sioux County Sheriff’s Office discovered the identity of the driver of a Toyota Avalon that struck a camper the previous day and then left without reporting the accident.

The driver of the Toyota Avalon was identified as Osvaldo Chilel-Chavez, age 16, of Sioux Center, IA.

Chilel-Chavez did not report any injuries.

The Toyota sustained approximately $6,000 in damage.

Chilel-Chavez was cited for operating a motor vehicle without a valid driver’s license, following too close and leaving the scene of an accident.

On Friday, July 16, at 4:43 p.m., the Sioux County Sheriff’s Office investigated a motor vehicle accident that occurred at the intersection of Highway 75 Street and 420th Street, one-quarter mile south of Sioux Center, IA.

Robert Wobbema, age 65, of Sioux Center was driving a 2015 Ford F-150 pulling a 2007 Keystone Springdale camper northbound on Highway 75; he stopped and was waiting for other vehicles before attempting a left turn onto 420th Street. A blue 2013 Toyota Avalon, traveling northbound on Highway 75 behind Wobbema, struck the camper, drove away from the accident and was not located. 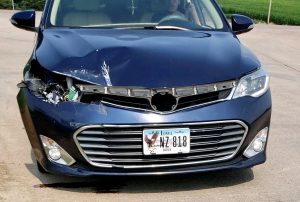