Deputy Van Ravenswaay has been a police officer at the Orange City Police Department for the past five years. Van Ravenswaay has also served the sheriff’s office as a Telecommunications Officer (911 dispatcher) as well as reserve deputy sheriff. Van Ravenswaay graduated from the Iowa Law Enforcement Academy in 2016. He received a Bachelor of Science degree in Psychology from Northwestern College in Orange City, IA.

Deputy Seth Maitlen is a native of Creston, IA and a 2021 graduate of Morningside College in Sioux City, IA where he received Bachelor of Science degrees in Social & Behavioral Science, Counseling and Psychology. Maitlin also comes from a family who has law enforcement experience with his father recently retiring from the Union County, IA Sheriff’s Office, where he served as Chief Deputy. Maitlen’s brother currently serves the Union County Sheriff’s office as a deputy sheriff.  Maitlin will be moving to Sioux County very soon and will attend the Iowa Law Enforcement Academy at a future date, where he will become a certified officer. 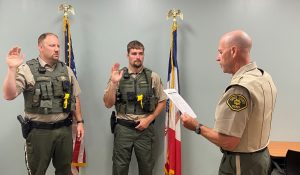 Deputy Van Ravenswaay, pictured on left, and Deputy Maitlen on right, receive their Oath of Office from Sheriff Altena