The 2006 Chevrolet Impala that was reported stolen on Tuesday, December 2, has been located by authorities in South Dakota.

On Tuesday, December 2, at 5:41 a.m., the Sioux County Sheriff’s Office investigated a report of a stolen vehicle that occurred in Boyden, IA.

Upon further investigation, deputies discovered that someone stole a 2006 Chevrolet Impala that was parked on a residential driveway. The vehicle has Iowa license plates JEJ443 and the word “Impala” spelled on the top of the windshield in white decal lettering.

In the video below, the first vehicle is believed to be a light green or silver Chrysler 300 followed by the stolen white Chevrolet Impala; both were last seen travelling eastbound on Webb Street in Boyden and we believe these two vehicles are connected.

We are asking Boyden residents to review their Ring doorbell or home security video systems to see if anyone has any further information that may be helpful in this case.

If you know anything about either of these vehicles or their locations, please call 911 or 712-737-3307 to report its location. 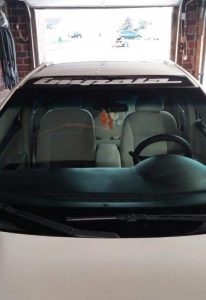