The certification consists of two parts: vehicles and rooms with a total of four drug hides of marijuana, methamphetamine, cocaine and heroin.

De Bruin and Sonny completed with near-perfect score of 198.34 points out of a possible 200.

Capt. Jamison Van Voorst said, “Once again, De Bruin’s hard work with Sonny is evident in their phenomenal detection demonstration at the certification. The level they perform at together should make the citizens of Sioux County very proud. Congratulations Sgt. De Bruin and Sonny on your exemplary performance!” 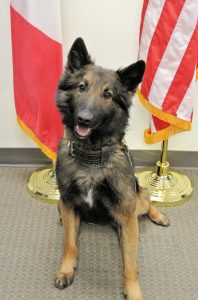