Gustavo Rodriguez, age 43, of Primghar, IA was driving a 2014 Freightliner semi-truck pulling a tank trailer westbound on 360th Street when he lost control of the vehicle and entered the south ditch. The vehicle and trailer came to rest on its side on the roadway.

The Freightliner and trailer sustained approximately $100,000 in damage.

The sheriff’s office was assisted by Hudson Fire and Hudson Ambulance. 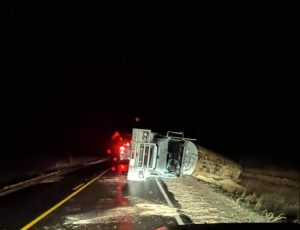