Ellis was transported to the Sioux County Jail where he was charged for criminal trespassing and interference with official acts causing bodily injury. 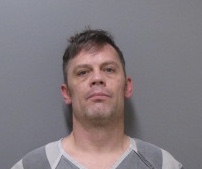