On Saturday, January 4, at 6:03 p.m., the Sioux County Sheriff’s Office investigated a hit and run motor vehicle accident that occurred at the intersection of the Highway 60 northbound off-ramp and McKinley Avenue, one half mile south of Sheldon, IA.

Darrel Barents, age 69, of Orange City, IA was driving a 2013 Buick Enclave northbound on Highway 60. He exited Highway 60 at the McKinley Avenue exit and stopped for the stop sign. A motorist driving a tan 1990’s regular cab Chevrolet or GMC pickup with rust around the bottom southbound on McKinley Avenue made a right turn, struck Barents, made a U-turn and drove northbound on McKinley Avenue at a high rate of speed toward Sheldon; the tan pickup was not located. The driver of the tan pickup is described as a white male, medium build, approximately 30 years old, with dark, curly hair with no facial hair.

The Buick sustained approximately $5,000 in damage.

Anyone with information about his accident is asked to contact the Sheriff’s Office. 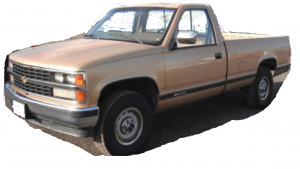