On Wednesday, August 7, at 3:22 a.m., the Sioux County Sheriff’s Office investigated a motor vehicle accident that occurred at the intersection on 7th Street and Linden Street in Hull, IA.

Kaytana Heimark, age 18, of Rock Rapids, IA, was driving a 2004 Honda Accord westbound on 7th Street when she failed to stop for the stop sign at Linden Street, drove over a curb, crossed a lawn and struck a residence at 1703 Linden Street.

Heimark was transported by the Hull Ambulance to Sioux Center Health; she was later flown by helicopter to Avera McKennan Hospital in Sioux Falls, SD for further treatment of her injuries. The homeowner was inside the residence at the time of the accident and was not inured.

Alcohol is believed to be a factor; the accident remains under investigation. 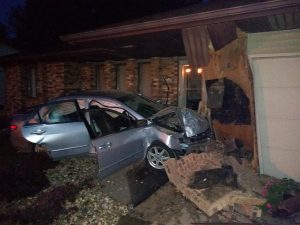